The project consists in the construction of a new bridge for crossing the Candiano canal, which is located in the port of Ravenna. The structure consists of a metal drawbridge, with a span of 73.35m and two symmetrical spans able to rotate around special hinges arranged on the relative abutment. The deck is of the orthotropic plate type, with trapezoidal section stiffeners and consists of two main box section beams; these beams are supported by stays connected to the stiffener element that has the function of both counterweight and constraint of the opening system.

This structure was realized by building the two bays on the ground and, subsequently, launching them from each shore of the canal. The bridge pavement consists of two layers of protective material (Primer FONKOR 1411 type), covering the sheet metal of the deck, using an epoxy-polyurethane elastomeric material, with quartz to ensure the adhesion of the vehicles. The two abutments, shaped like a box, house the final part of both main beams and the lifting jacks, in the open bridge configuration. Inside the boxes, in correspondence with the ballast, there are the devices for contrasting the vertical loads. At the center line of the bridge, a locking system has been installed to constrain the two parts of the deck during the closed bridge condition, allowing the continuity of the road level during vehicle and pedestrian transit; in the same way this connection allows relative sliding between the main beams due to thermal expansion. In order to prevent the boats from hitting the bridge structures in case of incorrect maneuver, four protective structures are built on both shores of the canal at a distance of approximately 4.60m from the current pier. In this way it is possible to guarantee a safety distance between boats and bridge and a free clearance in height of 30m between the canal level and the desk in opened configuration. The movement of each bay is achieved by 4 piston mechanisms powered by a hydraulic control unit, housed in the foundations below the road level and connected to the support towers of the deck. In order to guarantee both safety and management of infrastructure, during vessel traffic, the bridge is equipped with control and maneuvering devices. This system allows the lifting of the structure in all the wind conditions examined, up to an opening of about 72°, allowing the passage of ships up to a maximum width of 50m.

Besides, the project involved the construction of two embankments on both sides of canal, for easy access to the bridge, as well as two ramps connecting the bridge to the road network on both shores. With a view to allow the demolition of the old revolving bridge, located closed to the construction area of ​​the new work, the traffic was diverted to a specific temporary roadway, providing for the construction of a temporary floating bridge. Moreover, the project included both the lighting system for the temporary and definitive roads, and the design of wiring for the bridge control, writing a specific use and maintenance plan. 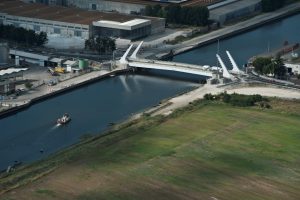 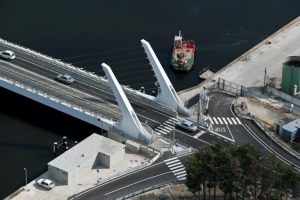 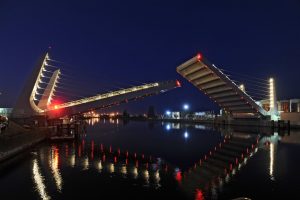 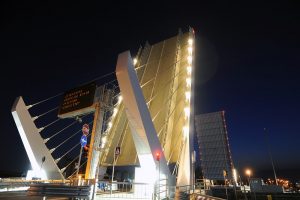 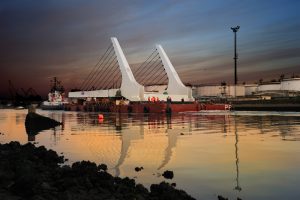