As part of the completion works of the Perugia Ancona - Maxilotto 2: Marche-Umbria road axis and Quadrilatero of internal penetration - the detailed and executive design was carried out for the SS.318 section «Pianello-Valfabbrica» (sub-lot 1.2) and for the SS.76 «Val d'Esino» in the sections «Fossato di Vico-Cancelli» (sub-lot 1.1A) and «Albacina-Serra San Quirico» (sub-lot 1.1B). In detail, the road alignment of the SS.318 has a development of 8.5 km, and it is entirely newly built, whose main works are: N°2 interchanges (Pianello and Valfabbrica), N°4 Natural Tunnels (San Gregorio North/South and Collemaggio North/South), N°2 Artificial Tunnels (Della Donna North/South) and N°13 Viaducts (with decks in mixed steel-concrete section and in C.A.P.). Also, the road layout of the two sub-lots of the SS.76 has a development of 21.0 km, and the new construction of some sections of the road (including interchanges), the adjustment and improvement of existing roadways have been planned. The main works envisaged are: N°5 interchanges (Cancelli, Borgo Tufico, Valtreara, Camponocecchio and Serra S. Quirico), N°22 Natural Tunnels, N°2 Artificial Tunnels and N°24 Bridges and Viaducts (with decks in mixed steel-concrete and in C.A.P.). 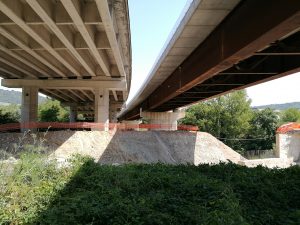 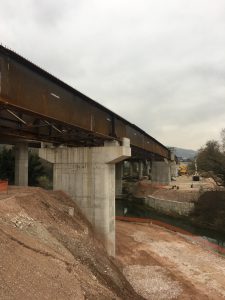 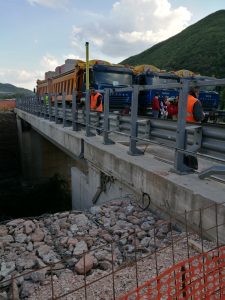