As part of the completion works of the Perugia Ancona - Maxilotto 2: Marche-Umbria road axis and Quadrilatero of internal penetration - the detailed and executive design was carried out for the SS.318 section «Pianello-Valfabbrica» (sub-lot 1.2) and for the SS.76 «Val d'Esino» in the sections «Fossato di Vico-Cancelli» (sub-lot 1.1A) and «Albacina-Serra San Quirico» (sub-lot 1.1B). The road alignment of the SS.318 has a development of 8.5 km, and it is entirely newly built, whose main works are: N°2 interchanges (Pianello and Valfabbrica), N°4 Natural Tunnels (San Gregorio North/South and Collemaggio North/South), N°2 Artificial Tunnels (Della Donna North/South) and N°13 Viaducts (with decks in mixed steel-concrete section and in C.A.P.). Also, the road layout of the two sub-lots of the SS.76 has a development of 21.0 km, and the new construction of some sections of the road (including interchanges), the adjustment and improvement of existing roadways have been planned. The main works envisaged are: N°5 interchanges (Cancelli, Borgo Tufico, Valtreara, Camponocecchio and Serra S. Quirico), N°22 Natural Tunnels, N°2 Artificial Tunnels and N°24 Bridges and Viaducts (with decks in mixed steel-concrete and in C.A.P.).

In detail, the executive design involved both the construction of new underground works and the adaptation and consolidation of existing ones, given the expansion of the road platform envisaged in the project.

The main design issues were encountered in the verification and sizing of the Cancelli South tunnel and in the evaluation of the improvement and adaptation works of the existing tunnels of the SS.76 lots, which at the same time allowed to guarantee the gabarits and the free heights required by regulation.

The Cancelli South has a portal of span equal to about 20m and a height of 11m, due to the presence of the exit ramp of the Cancelli interchange and enlargements for visibility on the inner edge. The structural analyzes and checks were carried out through FEM modeling (PROSAP), assessing the strength and stability of the temporary and definitive structures in all the executive phases, with particular attention to the casting phase. The Cancelli South natural tunnel (L = 345m) has the particularity of having a stretch of about 100m widening for reasons of visibility on the overtaking lane and on the deceleration and exit lane of the nearest Cancelli interchange. Therefore, the verification and sizing of the lining in the enlargement section was performed, simulating the progress of the excavation in enlargement by stages and the effects on the rock mass (Plaxis).

The interventions developed on the various tunnels of the SS.76 lots provide for the reinforcement of the final shell covering by means of prefabricated predalles with concrete of resistance Rck 40 MPa. To assess the thickness of the final lining in the existing tunnels and identify the presence of any injuries or defects in the casting of the same lining and reinforcement, Georadar surveys were carried out. The GPR methodology through the use of electromagnetic waves, allows the definition of the profiles, thickness and internal characteristics of the investigated object. This allowed to evaluate the optimal positioning of the prefabricated predalles on the basis of the profiles and cross sections obtained. 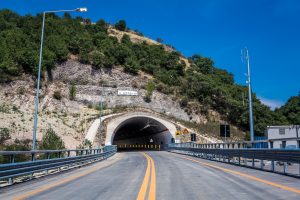 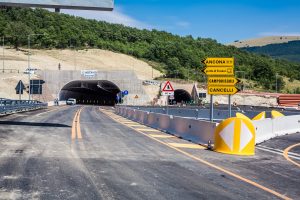 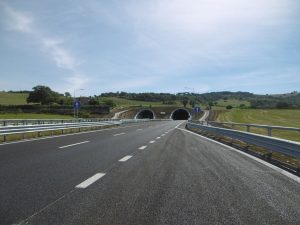 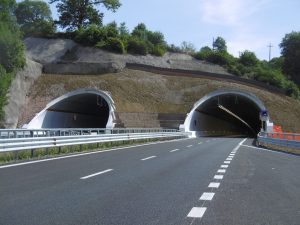 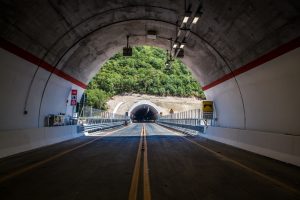 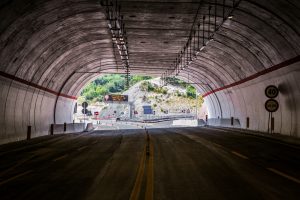 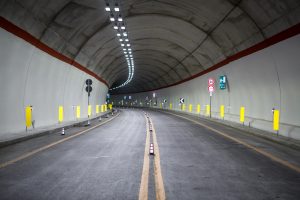 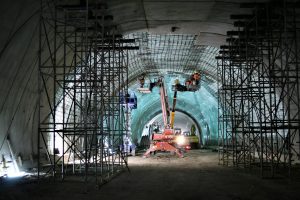