The «Quadrilatero» road infrastructural project consists in the completion and adaptation of two main roadways of Foligno-Civitanova Marche (SS77) and Perugia-Ancona (SS76 and SS318), in the construction of the «Pedemontana delle Marche», Fabriano-Muccia/Sfercia section, as well as other connections, intervalley route and all the interventions that ensure the connection between urban centers and existing industrial poles and, more generally, to improve and increase accessibility to the internal areas of the Regions. As part of the completion works of the Perugia Ancona - Maxilotto 2: Marche-Umbria road axis and Quadrilatero of internal penetration - the detailed and executive design was carried out for the SS.318 section «Pianello-Valfabbrica» (sub-lot 1.2) and for the SS.76 «Val d'Esino» in the sections «Fossato di Vico-Cancelli» (sub-lot 1.1A) and «Albacina-Serra San Quirico» (sub-lot 1.1B).

In detail, the road alignment of the SS.318 has a development of 8.5 km, and it is entirely newly built, whose main works are: N°2 interchanges (Pianello and Valfabbrica), N°4 Natural Tunnels (San Gregorio North/South and Collemaggio North/South), N°2 Artificial Tunnels (Della Donna North/South) and N°13 Viaducts (with decks in mixed steel-concrete section and in C.A.P.). Also, the road layout of the two sub-lots of the SS.76 has a development of 21.0 km, and the new construction of some sections of the road (including interchanges), the adjustment and improvement of existing roadways have been planned. The main works envisaged are: N°5 interchanges (Cancelli, Borgo Tufico, Valtreara, Camponocecchio and Serra S. Quirico), N°22 Natural Tunnels, N°2 Artificial Tunnels and N°24 Bridges and Viaducts (with decks in mixed steel-concrete and in C.A.P.). The definition of the functional and geometric characteristics of the road alignment was marked by the improvement of the functionality and safety of the circulation of the existing sections according to the planar-altimetric characteristics. From a functional point of view, the infrastructure, in the various lots, is configured as the Main Extraurban Road (Category B), according to Ministerial Decree 5 November 2001, providing two carriageways, separated by a 2.50m wide central traffic divider, with two 3.75m lanes for each direction, shoulders of 1.75 m on the right and 0.50 m on the left. The adoption of this type section, motivated by the adaptation of the infrastructure to the new characteristics of the traffic demand, corresponds to characteristics compatible with those envisaged for a functional class higher than the current one with a consequent increase in the traffic capacity. Along the route in some existing tunnels, which are not expected to be widened, the platform is compatible with the type III° of the CNR 78/80 (rather, it consists of a 3.50 m lane, an overtaking lane equal to 3.50 m, left and right shoulder equal to 0.50 m). The main design problems arose during the adaptation of the Cancelli interchange, which presents a geometry of the ramps and junctions strongly influenced by the evident orographic constraints that distinguish the area. Following the adjustment, the road layout of the junction has been modified to ensure the conditions of visibility on the ramps, increasing the curves radius and lengthening the deceleration and acceleration lanes of the South carriageway, to meet regulatory standards. The connection of the ramps to the local road network has been strengthened by providing new roundabouts, thus ensuring effective disposal of traffic currents. The project also concerned the regulation and treatment of the hydraulic platform, slope and tunnel dripping water, providing for specific new hydraulic works (first rain tanks, drains, hydraulic protections etc.) and the extension and adjustment of the crossings and existing works following the enlargement of the roadway. 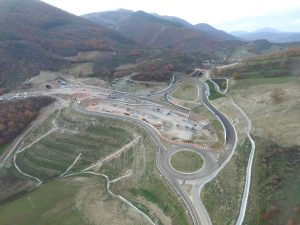 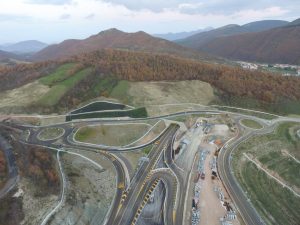 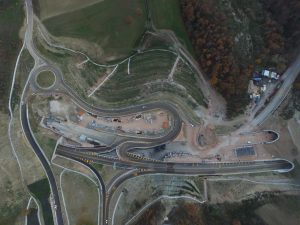 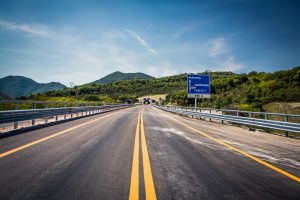 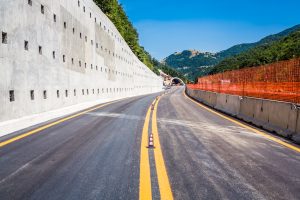