The bridges are a double swing type, rotating on the two central piers over a rim-girder system with rollers. On the upper part the bridges are bear on the rim girder by means of 8 bearing supports. On the lower portion of the rotation-gear, the load is transferred to the foundation by means of 112 rollers. The dimension of the rotation gear allows to transfer vertical forces and bending moments in both directions to foundation slab and to 38 piles (D=1.5m / L = 30m). At the two abutments the bridges are retained by anti-uplift restraints activated in opened and closed position. In closed position, a partial longitudinal continuity of the deck is provided by means of shear connections at the middle span. Both the portions of the swing bridges are composed by two cantilevered lattice truss, 150m and 170m long, respectively. The total length of the bridges is 640 m, while the interaxis between the central piers is 340 m. The allowed navigable channel after the final widening of the Suez Canal will be 316 m, corresponding to the distance between the new permanent protection jetties. The height of the bridges varies gradually from 15 m at the middle-span, to 60 m over the main piers. The transverse interaxis between the main lattice trusses is equal to 11.4 m. The lower deck has the same width, locally enlarged to 15.8 m over the central piers to accommodate the bearings over the rim-girder. The deck is composed by an ortotropic steel slab, resting over cross-girder with approximative interaxis equal to 4 m. Two longitudinal stringers with interaxis equal to 1.5m support the sleepers and the longitudinal rails as well. 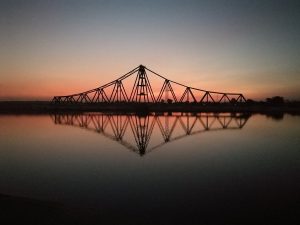 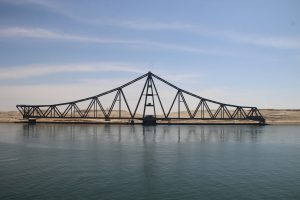 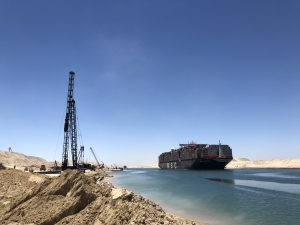 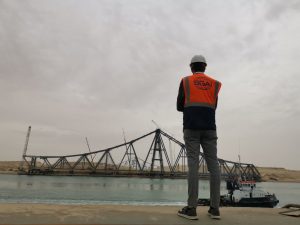 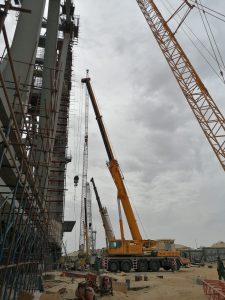 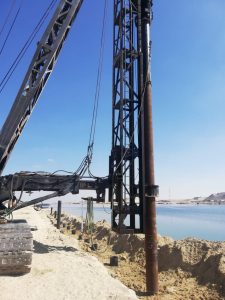